KKR VS MI, IPL 2022: The Pat Cummins innings no one saw coming

If we are to believe Shreyas Iyer, Pat Cummins had no business playing the knock that he did. “He was getting bowled now and then,” is how the Kolkata Knight Riders captain described Cummins’s net session the previous evening. And while the KKR camp believed that the game against Mumbai Indians was still in their grasp when Cummins walked out to bat, no one including Iyer could have predicted the carnage that was about to follow.

“I’m most surprised by that innings,” is how Cummins described his emotions after a whirlwind knock. Six 6s, four 4s, 56 runs and in 15 balls later, the allrounder had ensured KKR pulled off a stunning win to keep their unbeaten record in Pune intact. In fact, it had seemed KKR would huff and puff to a win instead of sprinting past the finish line.

As the game hung in balance, Jasprit Bumrah had two overs left, Tymal Mills was gearing up to finish his quota and Daniel Sams had no clue what was in store for him ahead. It wasn’t going to be easy but Cummins never got that memo. On the night, it was an individual at the peak of his game with things falling in place for him just the way he wants. When the 16th over started, KKR still needed 35 and Sams was about to have his worst nightmare come true. A straight hit over the fence was followed by the full toss that was placed wide of long-on. There was no breathing space for Sams from thereon. Another swipe over square leg fetched Cummins a six that went 74 meters and three balls in, the fate of the game had been sealed.

If Sams was under pressure, his execution betrayed him as well. The next ball – the fourth of the over – was banged in and pulled over fine leg. Sams was shaken and it showed. The smile wiped out. A high full toss resulted in a no ball and the free hit was pulled to the square leg fence as Cummins reached his half-century off 14 balls. He had equalled KL Rahul’s record and had ensured the KKR dugout had found its voice once again. The final ball was hit over the bowler’s head as Cummins stood with his arms aloft and Sams with the record of the second-most expensive over in IPL next to his name. 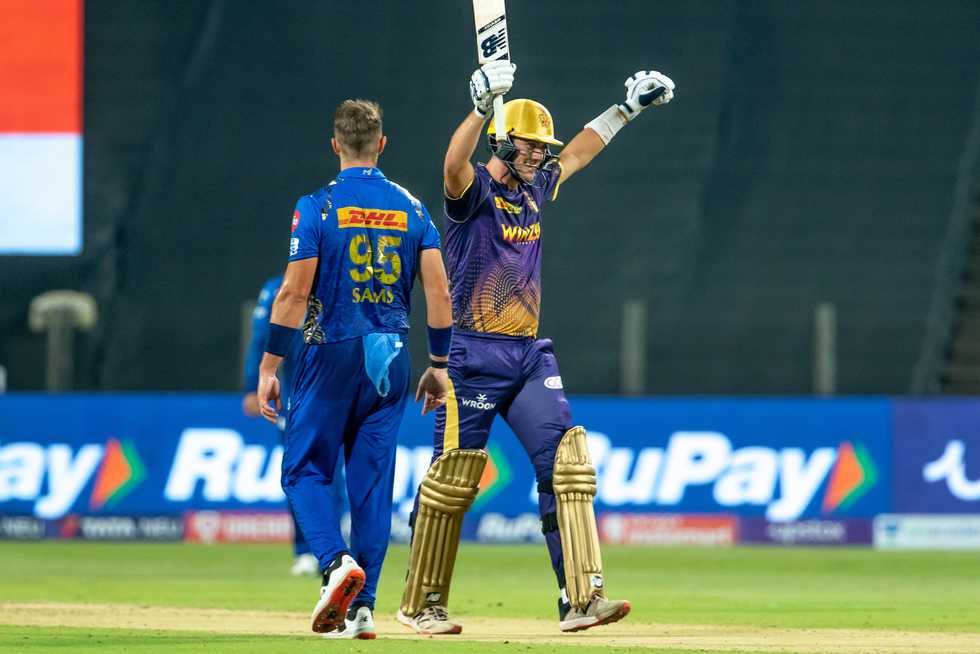 Cummins ended with a strike rate of 373.33 – the highest by any batter in IPL who has faced a minimum of ten balls.

“It’s hard when there’s a short boundary to risk bowling a yorker or a short ball. I was just kind of set up for every ball,” he said of his approach against Sams. “I was thinking of having a swing if it was in my area and wasn’t trying to overthink it.”

Cummins is in a phase in his life where a lot has been going for him. An Ashes win as Test captain. A Test series win in Pakistan. So it wasn’t a surprise that he backed himself to stamp his authority in IPL 2022 in his very first outing as well. Before Sams was taken apart, the over that really stung MI was Bumrah’s in the 15th. After just one run in the first three balls, Cummins slogged the pacer over cow corner to find the crucial six. From there on, there was no looking back. He chased the next wide one and found the ball swooping past short third for a boundary as KKR picked up 12 from that over to make things easier for themselves.

Sign up for TotalCric’s Daily Digest and get the best of Cricket News, tailored for you.